The Two Solitudes Assert Themselves

On June 24, 1889, he would state: “We are French Canadians, but our country is not confined to the territory overshadowed by the Citadel of Quebec. Our country is Canada.”

In Canada, the feeling of national belonging began to take shape slowly after Confederation. National unity was difficult to achieve given the presence of many social groups originating from different waves of immigration. The “two solitudes”, an expression that referred to the duality of colonists of French and British origin, marked this era of great change.

Francophones already feared assimilation at the time of Confederation. The first Prime Ministers were unilingual Anglophones. In Ottawa, power played out in English. 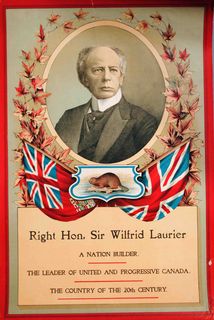 Wilfrid Laurier would be the first Francophone Prime Minister to govern the country. A man of compromise, he worked to maintain a balance between these two solitudes while including the immigrants and leading them to unite. Many times, during his mandate, he sought to please both groups, making the best decisions for the good of the country without considering language or origin. This balancing act would be criticized by both Anglophones and Francophones. It was said that he tried to please everyone by not taking a stand. From his standpoint, Wilfrid Laurier acted this way to bring Canadians to consider themselves as one and the same united people. Laurier governed for all, a courageous stance for the era.

The guiding thought of my life has been harmony between the diverse elements of our country. I cannot be certain that I have succeeded as much as I would have hoped, but the thought is true and one day it will prevail. (1905) [translation]