Possession of the Far North

The Far North and the Arctic have been political stakes for a long time. The Northern route is a way around the American continent. It is a means to link the Atlantic to the Pacific through the Arctic and quickly reach Russia and Asia. The route is coveted by many countries, among them Russia and the United States.

In July 1880, the British government ceded to Canada all its possessions in the Arctic, including undiscovered territories. Among these unknown territories was the Canadian Far North. It was Canada’s duty to explore these never-before-visited areas and the country’s responsibility to protect them from invaders.

From the onset, Macdonald’s Conservative government did not wish to invest in the preservation of the Arctic. Accordingly, other countries tried to take possession of the Arctic, among them the United States and Norway.

In 1903, a dispute between Ottawa and Washington concerning the border between Alaska and British Colombia was resolved in favour of the United States. The Americans were granted a strip of land naturally part of the British Colombian coast. Canada then grasped the importance of the Arctic for development and, above all, for the country’s protection.  Wilfrid Laurier agreed to finance an expedition to the North Pole led by Captain Joseph-Elzéar Bernier.

The crew left Quebec in July 1908. Every place that he stopped, Bernier repeated the same ritual: after finding a high point on a hill or rise, Bernier’s crew would bury a metal box, containing a proclamation claiming the land for Canada, under a cairn of stone. Then, the crew would centre a pole and raise the Union Jack.

On July 1, 1909, Captain Bernier went ashore at Perry’s Rick on Melville Island. It was the long-awaited moment. All the islands of the archipelago bore the Union Jack and it was there that Captain Bernier installed a plaque on which is engraved: 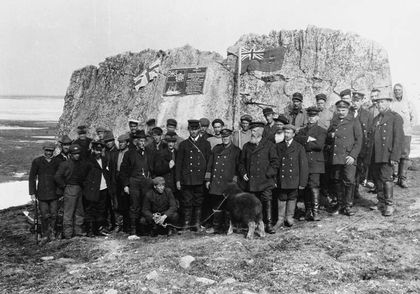 “This memorial is erected today to commemorate the taking possession for the Dominion of Canada of the whole Arctic Archipelago.”

Now Canada claimed the entire territory from the Yukon to Baffin Island, all the way to the North Pole. Canada took possession of the northern route linking the Atlantic to the Pacific through the Arctic.

However, this possession was disputed by the United States and Russia. Even today, the Canadian Navy must patrol these waters when the ice melts to protect the territory.