In 1900, Canada, a dominion of the British Empire, held its ground and firmly declared its desire for independence. Then Prime Minister Wilfrid Laurier negotiated reciprocity agreements with the United States. This was noteworthy, given that less than 50 years earlier, the situation was totally different.

As early as 1860, the idea of uniting the British colonies in North America into a confederation was increasingly popular among the leaders. Several reasons motivated this decision: the project of a confederation and the economic potential that it proposed were enticing and also represented a permanent solution to the political instability of the era. The idea was also supported by the fear of possible domination by the United States and the impression that Great Britain was increasingly hesitant to defend its colonies in North America against future acts of American aggression.

In 1867, after several months of discussion, the British North America Act was signed. The United Province of Canada became the Dominion of Canada. The country was made up of Ontario, Quebec, New Brunswick and Nova Scotia. The Act came into effect on July 1, 1867, a date now commemorated as Canada Day.

Since then, the constitution has been amended several times as the territory included expanded. In 1870, Manitoba and the Northwest Territories joined the Dominion, followed by Prince Edward Island in 1873 and the Yukon in 1898. Laurier’s government would integrate Alberta and Saskatchewan in 1905. Newfoundland joined Confederation in 1949 and Nunavut completed the country in 1999. 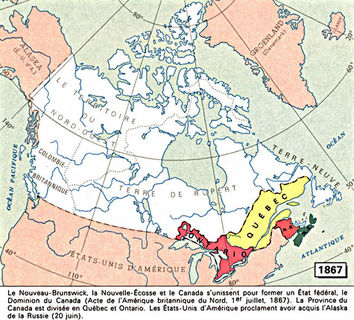 What the Canadian constitution specifies: